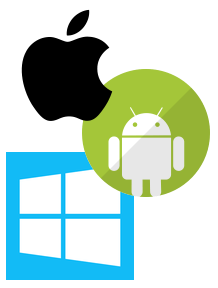 Android 6.0, IOS 9.1 and Windows Mobile which platform comes out on top? The state of the Mobile platform is both complex and simple. Let’s look at the simple angle for each platform and then I’ll announce a Winner at the end.

Starting off with Google’s latest release, we have Android 6.0 or Marshmallow. With each new iteration of Android, we have more focus on stability and performance much like what Apple’s IOS already has. This is evidenced by the fact that Android 6.0 looks just like 5.0 and about the only new visual feature is Google on Tap. The other improvements are under the hood primarily in battery performance with their Doze feature.

Next up is Apple’s IOS 9.1 which with every new version, focuses more on features much like what Android already has. For example, IOS 9.1 adds a “new” feature called split-view multi-tasking. This multi-tasking windowed approach has been available in Android for some time now especially on Samsung devices.

Windows Mobile isn’t adding anything new at least until Windows 10 Mobile comes out in December. Windows is trying to just get attention in a world dominated by Android and Apple. So what separates these platforms to determine who wins? It all comes down to software and eco-systems.

Now there will always be Fanboys and Fangirls in every camp, but software, eco-systems are what make or break a platform. For the non-believers, let’s first take a look at Android and Apple. Google’s Android is the most popular mobile OS in the World with more than 1 billion active installs but the most profitable OS is clearly Apple’s IOS. Apple is worth more than 700 billion dollars and will most likely be the first 1 trillion dollar company.

But what makes Apple so special? Well some would argue that their iPhones are so amazing but in reality, Android phones are more advanced and diverse due to the sheer number of hardware manufacturers making Android devices. For instance, Android already has phones with 2k and even 4k resolution screens a feature that iPhone users won’t have until 2016. But it’s not hardware that wins, it’s the eco-system and Apple dominates in this arena. Windows Mobile is a solid performing software but the utter lack of an eco-system is why companies like Pinterest and Mint are no longer doing app development for the platform even though Windows has been in the mobile space the longest. There are other mobile OS’es in the arena including Firefox OS, Ubuntu Mobile, and Sail OS but at the end of the day, it’s just Android and Apple’s World.

And who is the Winner in all of this? The answer is YOU the consumer! With so much competition in this space, the providers are constantly working on improvements that produce better experiences and grab more market share. Let’s just hope that amid these mobile Flame Wars, that we don’t lose the passionate Fanboys, Fangirls that make it sooo much fun.