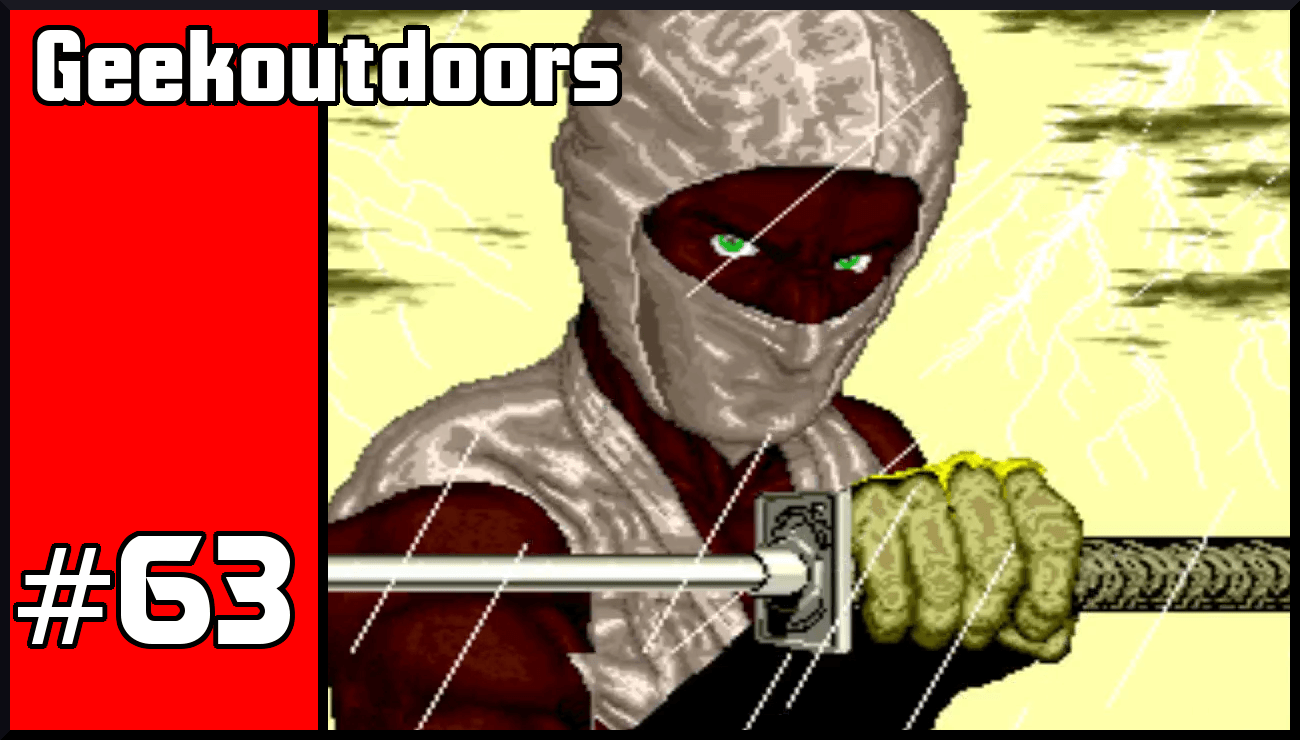 As kids, you’ve probably all been asked what you want to be when you grow up. Now most kids would answer with something like Astronaut, Doctor, Scientist, Movie Star, Singer or something like that, but for me, there was only one occupation…Ninja! Being a child of the 80’s, Ninja Movies were everywhere and they were Real Badasses! Now this is before the time of Teenage Mutant Ninja Turtles so these Ninjas actually cut and slice enemies into a bloody end. My actual favorite Ninja movie is Revenge of the Ninja starring my favorite Ninja Actor Sho Kosugi. Sho is a Japanese actor that was in so many Ninja movies that he’s pretty much the only name you’d think about when you thought about Ninjas here in the US. Now there were other popular Ninja movies/franchises as well such as American Ninja, Gymkata, and countless others. Now the real history of Ninjas and clans in Japan is way more interesting than any movie can do justice to, but being a kid, you only thought about how cool and awesome they were.

Ninjas not only ruled the movie landscape, but eventually they would also slice their way into the Video Game World. Being a kid during these times was just Ninja Heaven! So here are my Top 5 Favorite Ninja Games of all time:

Now technically the Ninja Turtles aren’t “real” Ninjas, but their historic influence in the 1990’s and their continued longevity today can’t be ignored. In the 90’s, Konami released the Arcade Smash Teenage Mutant Ninja Turtles and Cowabunga was it FUN! Whether you were playing single player or the more crazy 4 player mode, you were in for non-stop Turtle power. Everything from the graphics, to sound, gameplay and Pizza Time were perfect. Now there were console versions available specifically on the Nintendo Entertainment System, but they didn’t quite have the horsepower to re-produce the Arcade experience until later versions like Turtles in Time on the Super Nintendo.

Arcades back then was the only place that you can get the FULL gaming experience and none other pushed that forward more than Ninja Warriors. Now what was unique about Ninja Warriors in the Arcade, was the unique 2 to 3 screen monitor setup which was only available in the Arcades. The game itself was quite simple as it was a side-scrolling action game, but it was done so well. From the techno-futuristic music to the cool Ninja cyborgs, there was nothing like Ninja Warriors. About the only minor drawback was the overall speed of the game which was a little slow for my tastes especially compared to other Ninja games.

The TurboGrafx 16 was often an under-appreciated system and one spectacular game that was missed by many is Ninja Spirit. Irem, the creators of the legendary shooter R-Type, also developed this Ninja Insanity. Ninja Spirit was in the Arcades although it didn’t really make an impact until it was released on the TurboGrafx 16 here in the US or PC Engine in Japan. Ninja Spirit just assaulted your senses with blazing fast action, intense graphics, and a hectic gameplay style. Your Ninja has multiple weapons available at all times and they required a certain strategy to fully appreciate what this game had to offer. And one thing this game definitely had was an insane amount of challenge…you’re gonna die A LOT! But man is it all worth it.

Ninja Gaiden – this game needs no introduction especially to Nintendo fans. However popular this series was on the NES, most have never played the original Arcade game which was dramatically different from the console versions. Ninja Gaiden Arcade was a side-scrolling beatemup that had more in common with Double Dragon than its heavily action/story-driven home counterparts. As was usual during this time, the console versions didn’t have the power to reproduce the Arcade experience nor would it work as well for long-term play, but the Arcade’s influence is undeniable. Tecmo produced all versions where the Arcade delivered in the graphics and sound department, but it wasn’t until the Nintendo version until we were drawn into the Ninja Gaiden Universe which would later spawn a franchise of Ninja Action!

Sega will always be remembered for the much loved Genesis and cult favorite Dreamcast. But one major thing that is often forgotten is their complete dominance in the Arcades. Titles like Out Run, Space Harrier, Altered Beast, Virtua Fighter and countless others, all showed why Sega was the King but one title will stick in my mind forever. Shinobi was not only a childhood memory for me, but it was also what I thought of when it came to Ninja Games. As a kid, I remember being at Chucky Cheese seeing this real awesome intro with a Ninja face on the front with Japanese characters circling around the screen. And then when the game went into Ninja Domination, I knew this was a game I had to play forever! Shinobi had everything you’d ever want in a Ninja Game: A Badass Ninja with shruikens, katana, guns, and Ninja Magic! Plus the Shinobi Arcade games would go on to create my favorite Ninja game of All time: The Revenge of Shinobi on the Sega Genesis. What’s most compelling about Shinobi is that whether you played it in the Arcades or Consoles, you always felt like you were a Ninja and that is why it’s my Number 1 Ninja game of all time.