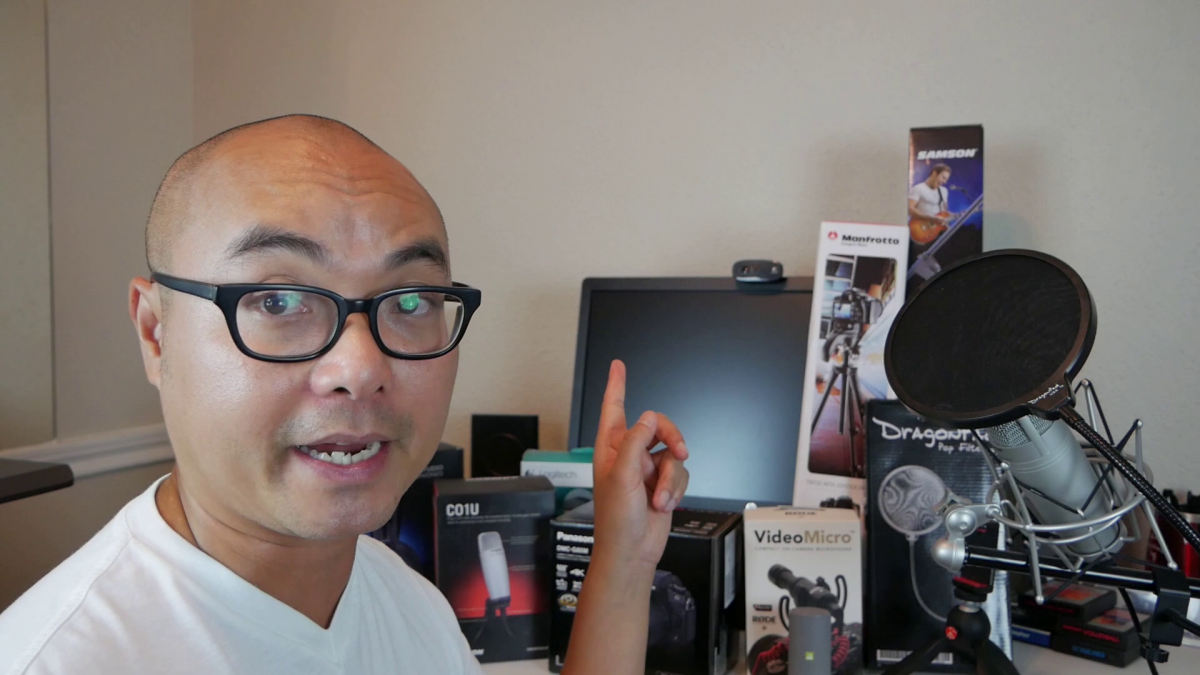 If you’re just starting out on YouTube, you might feel overwhelmed by everything that’s needed especially when it comes to audio video equipment.

This can even be stressful for some YouTube beginners as they’re probably thinking they’ll need to spend thousands of dollars on expensive video cameras, tech accessories, and other video production equipment.

But in this article, I’ll show you the Top 5 MUST HAVE YouTube equipment for beginners that will make your video quality look more professional without going bankrupt!

Before we begin, let’s start off with the most important piece of equipment you should all have and that’s your smartphone!

So this Top 5 equipment list will all be focused around using your smartphone as your camera but the best part is, this same YouTube equipment can be used with a “Real” camera later on.

The most important part of video production is actually not the video – it’s the audio! You can have the highest-quality video with maximum resolution, but if you have poor audio, then your video is poor as well.

This is often an overlooked aspect of YouTube videos that can be easily fixed and it will have the greatest impact on the quality of your content.

Most beginning content creators will use the built-in audio from their smartphone, which is what I did as well for literally hundreds of videos. And while the internal microphones can sound good, they simply can’t match the quality of an external microphone especially when it comes to background noise and wind.

And when it comes to microphones, there are countless options out there, but my favorite is the Rode VideoMicro On-Camera Microphone.

The Rode VideoMicro is a compact all-metal high-quality cardioid condenser microphone that comes with a shock mount, windshield filter plus it requires no battery. And using it is super simple as it plugs directly into the 3.5mm headphone jack of your phone.

The result of using the Rode VideoMicro was dramatic as now my audio wasn’t only clearer but since it has a wind filter, the background noise has literally disappeared!

==> Get the Rode VideoMicro Microphone

All of this improvement cost about $60 and if this is a stretch for your budget, then simply use a pair of ear buds that has a built-in microphone which can be had for less than $5 or maybe you already had some lying around for free.

Now although the ear buds might not give you the same level of quality of the Rode VideoMicro, it’s still going to be an improvement versus just using the phone’s internal microphone.

Once you have your external microphone, the other must have tech accessories are a phone clamp and a tripod.

Now you can try to shoot videos without this, but holding your phone while having an external mic can be a nightmare plus you’ll most likely get shaky footage or maybe even drop your phone!

My phone clamp of choice is the Manfrotto Clamp ($10) and the tripod that I’m using is the Manfrotto Pixi Mini Tripod ($20). So the clamp will keep your phone held in place while being attached to the mini tripod which is adjustable in multiple angles.

This will allow you to easily keep your phone steady and secure while giving you more freedom of movement and of course also avoiding the likelihood of your phone slipping out of your hand.

==> Get the Manfrotto Smart Clamp and Mini Pixi Tripod

The Manfrotto Universal Clamp is sturdy and it holds the phone tightly insuring that it won’t slip out even with rapid motion. And the Manfrotto Pixi Tripod has a high-quality stainless steel build that is also versatile with the adjustable ball head and collapsible legs.

So for about $30 total, you’ll get non-shaky cam footage and minimize the risk of having your phone shattering to a million pieces!

Another huge boost in video quality comes from the most important element next to audio – Lighting. Having proper lighting is what will separate the average videos from the wow videos!

Lighting is especially crucial when you’re in indoor situations where natural lighting or standard light bulbs are simply not enough. With poor lighting, you can expect your videos to be dark, uneven and grainy.

With the LS Photo Studio Pro Softbox lights ($70), I’m able to control the amount and angle of my light as I have two different light sources. Since these lights were made for video or photography environments, you can be assured that it’ll be better then your current lighting setup.

And the differences in video quality are absolutely mind-blowing when you’re comparing the difference without lighting. This is especially true when using smartphone cameras as the lenses are much smaller than normal cameras resulting in weaker low light performance.

By having control of your lighting, you no longer have to depend on shooting your videos in daylight or in “perfect” conditions giving you more freedom to create on your own time.

The final must have piece of YouTube equipment is a Camera Bag. Now you’re probably wondering why you’d need a camera bag if you’re using your smartphone.

Well if you’ve gotten all the video production equipment on this list, then it makes sense for you to have something to carry it in. And my camera bag of choice is the Lowepro BP 150 ($60).

I chose the Lowepro BP 150 since it’s small, lightweight, and durable plus it’s also fairly weather resistant. This is perfect for someone whose just starting out and not carrying around pounds of camera gear!

It’s easy to pack in your microphone, phone clamp, tripod, smartphone and other video equipment without sacrificing portability. And whenever you get a camera, then you’ll already be prepared to add a camera and lenses to your portable video production studio.

With this essential YouTube equipment setup, you’ll be ready to produce more professional looking videos all with a total average cost of less than $250 plus it will grow with you even when you’ve become a YouTube Influencer Star!